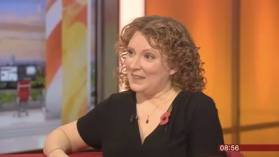 Sarah began her career at the University of Hull, where she completed her Ph.D. on historical writing produced during the Wars of the Roses, and received a scholarship to work with medieval manuscripts in New York, Princeton and Harvard.

In 2005 she was awarded a British Academy Research Grant to study a collection of fifteenth-century English manuscripts in Tokyo, Japan, and in the following year she started working at the University of Liverpool, where teaches and researches Medieval and Renaissance literature and history. As well as belonging to various professional bodies, learned societies, and research networks, Sarah is a member of the Editorial Advisory Board for Liverpool University Press, Advisory Editor for The Literary Encyclopedia, and Vice-President of The Medieval Chronicle Society. She also has the honour of being a Fellow of the Royal Historical Society and one of BBC Radio 3’s New Generation Thinkers, an accolade that has allowed her to make exciting programmes for radio and television.

Over the years Sarah has published and broadcast on a wide range of subjects, including the Wars of the Roses, mermaids, King Arthur, castles, Anglo-Scottish relations, early book culture, medieval animals, scribes, and Game of Thrones. She is currently editing chronicles produced during the Wars of the Roses; working on the oeuvre of the late medieval scribe known as Ricardus Franciscus; and, with the assistance of a Leverhulme Fellowship, writing a cultural history of the mermaid.

Sarah regularly contributes to public events across the UK, directing The Liverpool Players and offering talks at festivals and heritage sites. In recognition of her impact on the ‘cultural life and learning’ of the North West, she received a ‘Celebrating Success’ award in 2014. On those rare occasions where she finds herself blessed with spare time, she enjoys playing the harp, being near the sea, and stargazing. She lives in the North West of England with her family.