A few months ago I commissioned a replica late fifteenth-century Burgundian gown to wear for my medieval storytelling session at Lancashire Archive’s ‘Medieval Day’. Popular throughout Northern Europe for roughly five decades, the Burgundian gown is a layered outfit (an ‘A-line’ shaped gown worn over the top of a tight-fitting kirtle and chemise), which evolved from its loose-fitting predecessor the houppelande.

Isabeau of Bavaria and her ladies in waiting wearing wide-sleeved houppelandes in British Library MS Harley 4431.

The houppelande was a sumptuously weighty gown, lined with fur, worn over a slim fitting cotehardie and chemise. By the early fifteenth century it had developed a long train, large turned-back collar and lavishly long sleeves. In the 1440s the sleeves started to become tighter again and, as the century moved on, they became the slim-fitted sleeves of the burgundian gown, with fur or fabric bell-shaped cuffs that could be turned back. The collar of the houppelande similarly evolved, dropping down further and wider, until it became the V-neck shape of the burgundian gown. Other changes included the gradual introduction of a deeper belt, or girdle, to draw in the loose-fitting skirt, creating a more slender waist line. By the end of the century the top of the dress had become so fitted that such a large belt was no longer needed and ladies (by this time Tudor ladies) wore thinner, decorative belts.

For late fifteenth-century inspiration, I turned to my favourite images of the gowns from medieval art and manuscripts: a depiction of Saint Ursula in the Master of Lucy Legend’s painting of the Virgin surrounded by female saints (circa 1488); two images of Mary of Burgundy in Mary of Burgundy’s Book of Hours (circa 1477); a painted panel circa 1480 depicting Saint Catherine converting the scholars (Walters Art Museum 37.2487); and The Whore of Babylon in Pierpont Morgan MS M. 68. 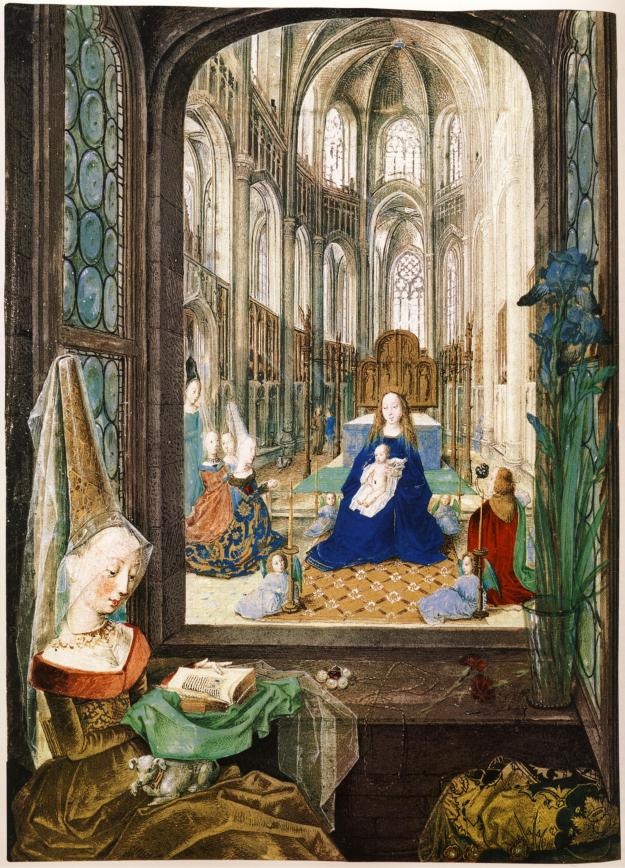 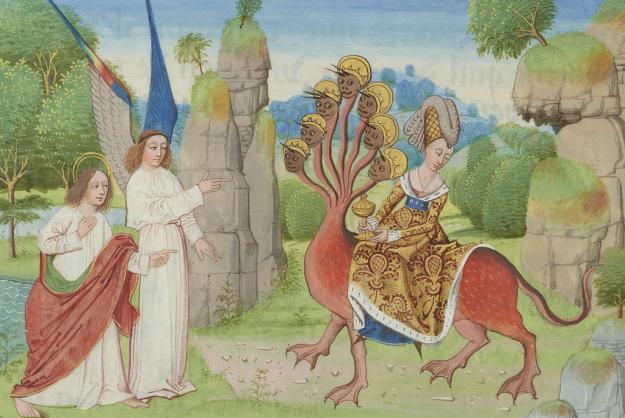 The Whore of Babylon. Apocalypse of Charles the Bold; Belgium, Bruges, circa 1470. Pierpont Morgan MS M.68.

After much deliberation, I opted for the black and gold gown worn by Saint Ursula, with a red kirtle, like those worn beneath Ursula’s and Catherine’s gowns. The neckline of Mary of Burgundy’s gown is deeply cut and her kirtle (assuming she has one) can’t be seen, instead she has a transparent partlet, that can just be made out above the neckline of the dress. Made out of wool or linen (or both), late medieval kirtles are most commonly seen in red, blue, green or (for the very wealthy) cloth of gold.

To complete the outfit, I needed a headdress of some kind. The steeple henin worn by Mary of Burgundy is probably the most commonly known medieval headdress (think – somewhat incorrectly – pointy princess hat), but henins depicted in English sources of the late fifteenth century tend to be the truncated or butterfly designs. 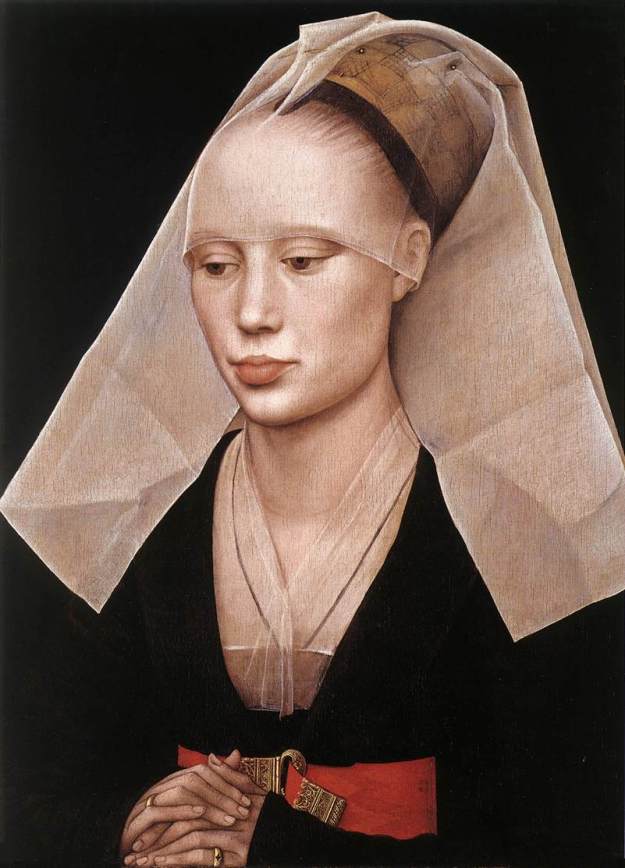 Covered by a veil or cointoise, that often continued down over the woman’s face or forehead, the henin was designed to show off a high forehead (considered so attractive that women plucked or shaved their hair back to exaggerate it). Most depictions of henins and other headdresses show a short loop that appears to have been attached to a headband that helped to keep the headdress in place or adjust it.

Panel of a triptych showing the Moreel Family by Hans Memling (1484). Barbara Moreel wears a truncated henin and cointoise (and red girdle), while the girls behind her wear headbands with loops.

In the end, I opted for a reticulated headdress similar to the one worn by Saint Ursula and by Margaret of Denmark, Queen of Scotland, in an altarpiece by Hugo van der Goes (circa 1482).

The reticulated and crowned headdress of Margaret of Denmark, Queen of Scotland. Altarpiece by Hugo van der Goes

A deep red belt, with an elaborate brass D-Shaped buckle, like those worn by Barbara Moreel and Van der Weyden’s ‘Lady’, completed the gown.

The finished gown and headdress, expertly crafted by Alexis at Decosa Design, and the beautiful belt by Bayley Heritage Castings are pictured below. 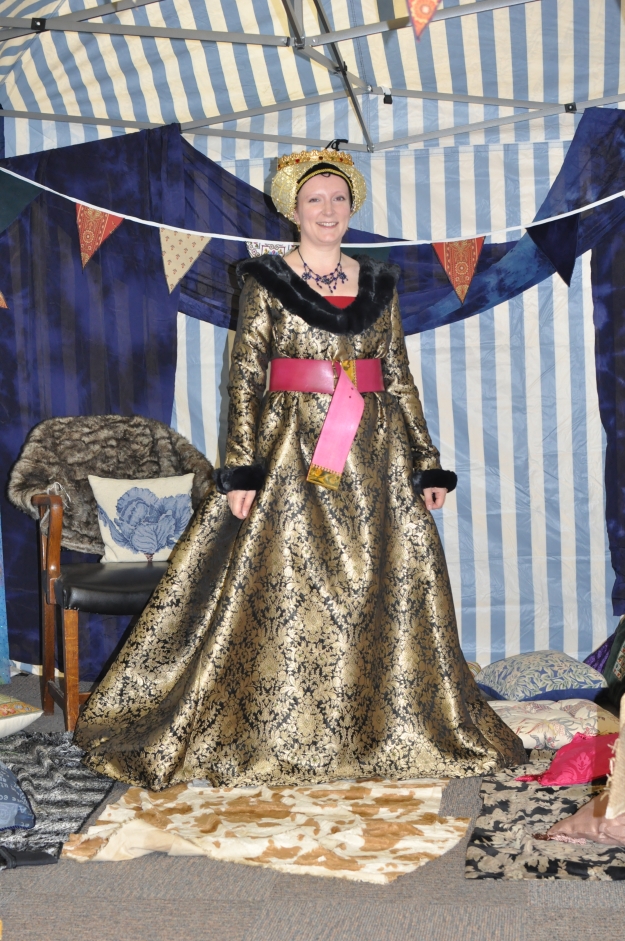 One of the King’s Men and I at Lancashire Archive ‘Medieval Day’.