Welcome to my occasional blog – The Parchment Mirror.

This is where I will share my fascination with the material remains of the Middle Ages, the manuscripts, literature, art, music, and other precious artefacts, that bring history to life and illuminate medieval culture in thrilling and often unexpected ways.

The inspiration for this blog came from a series of ‘Medieval Entertainment’ tweets that I shared on Twitter a few months ago. I originally envisaged the series comprising approximately ten tweets about the different forms of entertainment available to people in the Middle Ages, but the more I explored the various pastimes illustrated in contemporary manuscripts, the bigger the series grew. I ended the series at fifty-six tweets (across two weeks), but I could have gone on, especially if I’d dedicated more than one tweet to the games that I grouped together under the headings ‘ball games’ and ‘board games’. This blog will allow me to revisit the various forms of entertainment I tweeted about and expand on those activities that my Twitter followers and I found most interesting. It will also allow me to share some of the incredible reflections of the medieval world contained within the literature and manuscripts of the period. Watch this space.

To officially launch my blog, it is only fitting that I should say a few words about the manuscript that inspired the title and featured in my entertainment series: the famous Luttrell Psalter.

The Psalter, otherwise known as British Library Additional MS 42130, is one of the British Library’s greatest treasures; it was made in the first half of the fourteenth century (c. 1325-35) for Sir Geoffrey Luttrell (1276-1345), lord of Irnham in Lincolnshire. Psalters were devotional books that contained the Book of Psalms and other liturgical items, such as calendars, which marked important feast days and often represented medieval life though the ‘Labours of the Month‘. The Luttrell Psalter is particularly special because in addition to containing illustrations typically found in psalters – scenes from the life of Christ and images of the biblical king David, who was believed to be the author of the psalms – the margins of the text are brimming with depictions of daily life in medieval Irnham. From images of low-born peasants tending the fields to striking representations of Geoffrey Luttrell and his noble family feasting and travelling, the psalter offers an exceptional peak at life at both ends of the social spectrum. 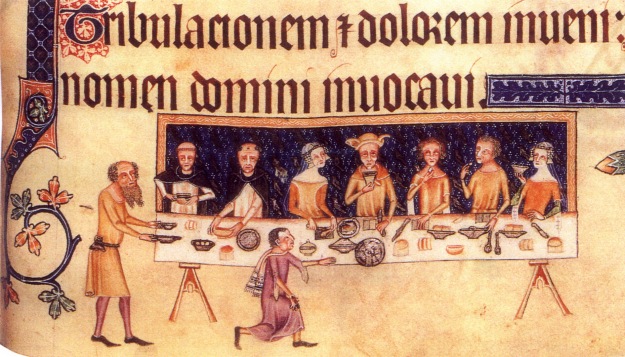 As we turn the pages of the psalter, moving through the seasons, we are rewarded with representations of contemporary fashion, rural life, feudal obligation, and fourteenth-century humour. Alongside images of work and play, we also find fantastic grotesques and hybrid creatures drawn straight from the imaginations of the psalter’s artists. Extraordinary drolleries like this commonly inhabit the margins of devotional texts like the Luttrell Psalter and scholars believe that they represent the chaos that lurks beyond the borders of established medieval structures and rule.

As the proud owner of both the British Library facsimile and ebook editions of the psalter, I never tire of looking at the wonderful scenes. They capture my imagination precisely because of the intimate relationship that emerges between the manuscript’s creators and the landscape the artists chose to depict.

To learn more about the psalter’s representation of medieval life see the book that inspired the title of my blog: Michael Camille’s Mirror in Parchment: The Luttrell Psalter and the Making of Medieval England.