If you shut your eyes and are a lucky one, you may see at times a shapeless pool of lovely pale colours suspended in the darkness; then if you squeeze your eyes tighter, the pool begins to take shape, and the colours become so vivid that with another squeeze they must go on fire. But just before they go on fire you see the lagoon. This is the nearest you ever get to it on the mainland, just one heavenly moment; if there could be two moments you might see the surf and hear the mermaids singing. [J.M.Barrie, Peter Pan]

For as long as I can remember I’ve been enchanted by mermaids. One of my earliest memories is watching the Japanese anime version of Hans Christian Andersen’s The Little Mermaid. Released over a decade before Walt Disney’s movie, the anime film broke my heart by remaining true to the original ending of Andersen’s tale (published in 1837), in which the mermaid dies after sacrificing everything to gain the love of a prince she saved from drowning.

Statue of The Little Mermaid in Copenhagen.

As a little girl who demanded a happy ending for the brave, faithful and selfless mermaid, I recall fleeing to the bathroom in tears as she perished and turned to sea foam. From that moment I fell in love with mermaids and wanted to be part of their world as much as Andersen’s Little Mermaid wanted to be part of ours. 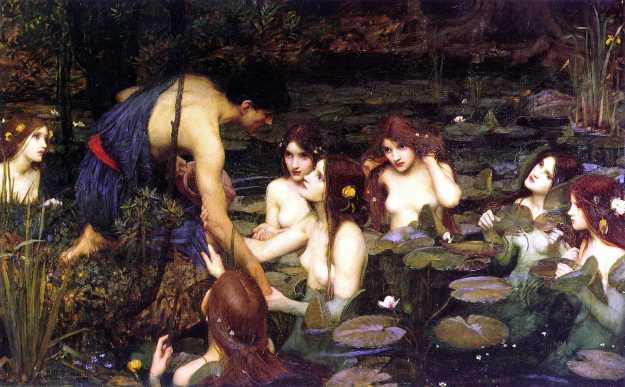 My older self still has that childlike fascination and feeling of injustice at the Little Mermaid’s story, but mermaids also appeal to me more broadly because they embody mystery and duality: as hybrid creatures, they help to define what makes us human.

As part of my ongoing research into mermaids, I’ve been looking into the multi-faceted character of the sea-maid and the element in which she dwells. Last year, part of my research fed into a special edition of BBC Radio 3’s Words and Music, which is being repeated on Sunday 27 July 2014, 6.15pm (GMT). Produced by the brilliant Philippa Richie, my programme is inspired by the different ways in which mermaids have been a well-spring of creativity for composers and writers from diverse cultures across time. All kinds of sea maidens are included, from Dvořák’s tragic water sprite Rusalka, who asks the moon to tell her beloved how she feels in the famous ‘Song to the Moon’, to Gershwin’s ‘trollop’ Lorelei, whose liberty and sexual allure prompts the human singer of her tale to aspire to be a femme fatale of similar calibre. With dramatic readings by Toby Stephens and Amanda Root, I couldn’t have been happier with the result. 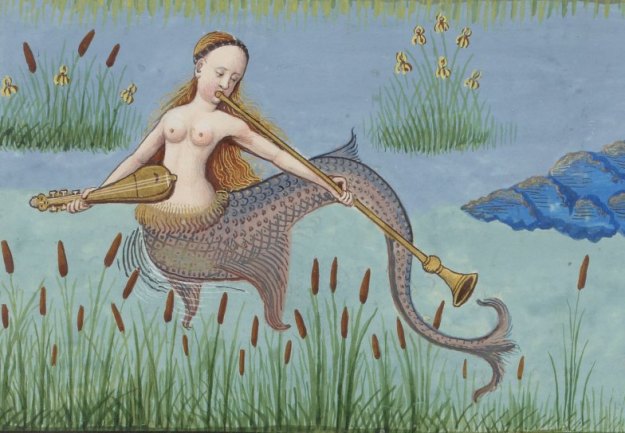 The programme begins with the lively and colourful mermaid lagoon in Barrie’s Peter Pan, and an evocative piece of music inspired by one of the most famous and influential water sprites, Undine, or Ondine, whose name is first recorded in the alchemical writings of Paracelsus (1493-1541). Originally the name Undine defined the species of elementals inhabiting waterfalls and forest pools, but by the nineteenth century it had become the forename of a water nymph that fell in love with a human and married him to gain an immortal soul. Undine’s story became incredibly popular in the nineteenth century when the German Romantic writer Friedrich de la Motte Fouqué wrote a novella, Undine (1811), about her ill-fated marriage to a knight called Huldebrand. Her story is similar to The Little Mermaid, and it inspired the work of several composers, including Tchaikovsky, Debussy, and Henze.

Mermaid from Besançon, BM MS 69. Breviary, use of Besançon. Rouen.

Alluring and often deadly, we see a darker, predatory and sexual side of mermaids at the forefront of the extract taken from a thirteenth-century encyclopaedia, De Proprietatibus Rerum, written by the Franciscan scholar Bartholomeus Anglicanus, or Bartholomew of England.

Later, we hear how explorers like Christopher Columbus attempted to make sense of the new creatures and worlds that they encountered in the Age of Exploration. Columbus’s observation that mermaids ‘are not so beautiful as they are painted, though to some extent they have the form of a human face’ seems to imply that he saw manatees rather than the arousing, yet sexually unavailable fish-maidens conjured by imaginative sailors.

By contrast, Haydn’s canzonetta, ‘The Mermaid’s Song’ (1794), offers a more playful rendition of the mermaid’s seductive call to ‘follow, follow, follow’ her beneath the waves. One of a small number of technically simple songs composed for performance in a drawing-room setting by a solo voice and keyboard, the expressive flourishes and unrelenting liveliness of the piano’s watery soundscape complements the simplicity of Anne Hunter’s charming lyric.

In Walter de la Mare’s ‘Sam’, a mermaid is used to contrast the self-doubt and inexperience of youth with the playful confidence and self-awareness that comes with old age, while T. S. Eliot’s ‘The Love Song of J. Alfred Prufrock’, uses the mysterious and uninhabitable underwater world to reflect the narrator’s feelings of sexual inadequacy and, more generally, the individual’s isolation in the modern world:

Shall I part my hair behind?   Do I dare to eat a peach? I shall wear white flannel trousers, and walk upon the beach. I have heard the mermaids singing, each to each.

I do not think that they will sing to me.

I have seen them riding seaward on the waves Combing the white hair of the waves blown back When the wind blows the water white and black. We have lingered in the chambers of the sea By sea-girls wreathed with seaweed red and brown Till human voices wake us, and we drown. [T.S. Elliot, Extract from ‘The Love Song of J. Alfred Prufrock’]

Several of the pieces that made the final edit draw upon the mermaid’s lack of an immortal soul to explore love and difference. While Anderson’s The Little Mermaid is the most famous example, Oscar Wilde’s The Fisherman and his Soul (1891) turns the motif on its head to highlight the conflict between physical love and spiritual salvation, and individual happiness versus social expectation. The very form of mermaids – part animal, part female – is ideally suited to negotiating such tensions, a concept that is also brilliantly tackled in Daniel’s ‘Ulysses and the Siren’ (1605), as we find Ulysses (the Latin counterpart of Odysseus) impervious to the siren’s lure. Writing during a new wave of exploration, Daniel’s poem addresses the pursuit of honour and renown achieved through an active life, not averse to war, versus passivity and the pursuit of individual pleasures closer at hand. For Ulysses, the promise of fame is more attractive than the siren’s song. 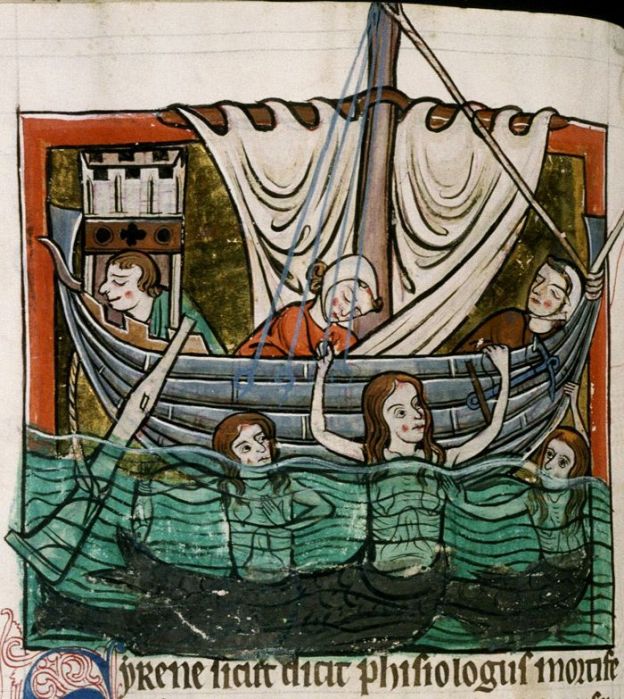 As time permits, and my research develops, I’ll dive deeper into the legends associated with mermaids and the infinitely complex ways that mankind has used them over time. But for the moment, dear reader, I’ll leave you with an invitation to hear the mermaids singing on Radio 3 this Sunday…

You can follow the progress of my work on mermaids on this blog and here.